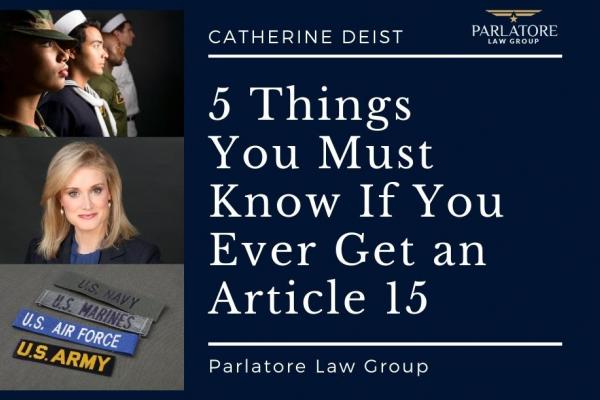 You probably have not thought much about an Article 15 unless you have received one.  You only have days to respond, so you must act quickly.  This article goes over the five things you must know if you receive an Article 15.  To clarify, “Article 15” is a term most commonly used by the Army and the Air Force to refer to Non-Judicial Punishment or “NJP.”  In the Navy, it is also sometimes referred to as a “Captain’s Mast.”  The statutory authority for an Article 15 is in the Manual for Courts-Martial (MCM), which is used by all the branches of the military, including the Coast Guard.

1.  The first thing you must know if you receive an Article 15 is why you are receiving an Article 15: it’s because your commander believes that you did something in violation of the UCMJ, and - quite frankly - he or she wants to punish you for it without going through the trouble of taking you to a court-martial.  So, it is important to understand that commanders use Article 15s as a tool to punish members for committing minor offenses under the UCMJ.  There is no federal conviction that will follow you outside of the military; just punishment (but no jail time) and of course, the Article 15 stays as a part of your permanent record.

2.  The second thing you must know if you receive an Article 15 is that you do not have to accept it, UNLESS you are attached to or embarked on vessel.  After talking with your attorney, you may decide that you would prefer to turn down your Article 15 and force your commander to take you to a court-martial where you must be found guilty beyond a reasonable doubt.  If you win, case closed!  However, if you choose to take your case to a court-martial and you LOSE, you have a federal conviction that will follow you outside of the military, and you face the possibility of serving jail time.

4.  The fourth thing that you must know is that if you choose to accept the Article 15, you still get an opportunity to respond and “plead your case,” or you can choose to admit guilt and ask for lenient punishment.  In your response, you can state all the reasons why you should not receive the Article 15 at all or why punishment should be lenient: maybe there is missing evidence, you are actually innocent, or certain punishment would be unfairly detrimental to you.

5.  The fifth thing that you should know is that there will be lasting consequences if you accept an Article 15.  The immediate consequences, of course, is the punishment you receive.  That punishment can range from extra duty to reduction in rank.  BUT, did you know that an Article 15 has long-lasting effects?  For example, an Article 15 could become the basis for an administrative discharge, and result in a negative service characterization.  If that is the case, it could affect your Veteran benefits, and will be reflected on your DD214.  If your Command does not discharge you, an Article 15 will likely prevent you from re-enlistment or making your next rank.  Although accepting an Article 15 may ultimately be the best choice for you, you should understand the effects that an Article 15 will have on your career.

Connect with me for a free consultation: