He said, She said: What to know about filing a defamation claim 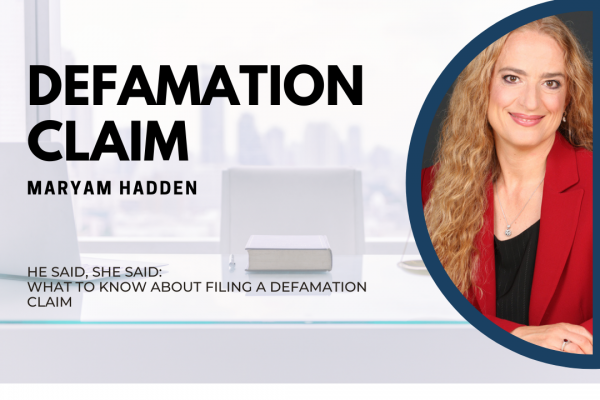 “Sticks and stones may break my bones, but words will never hurt me.”  As familiar as that childhood line is, sometimes it just isn’t true.  Words CAN hurt.  The hard part comes in figuring out which words just hurt your feelings or embarrass you, and which could have you heading for a courtroom.  Although the answers change a bit from state to state (which is one of the reasons you should always consult a lawyer early if you’re considering filing a defamation claim), there are some guidelines that apply to most defamation cases.

Second – the person who made the statement must either know that it was false, or at least be acting recklessly by disregarding the fact that it might be false.  This standard is lower and only requires negligent conduct in many states if you – “you” being the victim – are a private person (meaning you’re not a public figure or someone the media would be interested in; just valuing your privacy is not enough to make you a private person in defamation law).  Ultimately, the thing to remember here is that if someone is innocently passing along false information, they probably won’t be liable for it.

Third - the statement must be published.  It is not enough for someone to say something untrue about you to your face, as awful as that is.  It needs to be “published” by being told or written to someone else.  Sometimes that’s very public, such as a social media post, a blog, or a newspaper article.  But a “quieter” publication – say, an email or a text message to your boss – could also qualify as publication.  Knowing when and how something was published is very important in defamation cases; if you’re concerned about something false that someone said or wrote about you it’s always good to get and keep a copy.

Fourth – in most cases, you must show that you were actually damaged by the statement.  People stopped coming to your store, for example, or you lost your job, or you were damaged in some other way.  In some states, however, certain kinds of defamation do not require you to show damages.  In these states, if you are a victim of “per se” defamation damages are presumed just from the nature of the lie being so terrible.  An example of per se defamation would be if someone called you a rapist or a murderer.  Those claims are so terrible that damage is just assumed in states that recognize per se defamation.

Fifth – the statement must actually be defamatory.  A lie that is a compliment – ie: Mary gave me cake when she didn’t—is not defamation. The lie must be negative to be defamation.  And it can’t just be someone’s opinion – saying someone is a jerk is not a nice thing to do, but it’s not defamation either.

So, what information do you need to build a defamation claim?  You need to know who said it.  The author of a statement can always be sued.  It is possible to file a defamation claim against “John Doe” if you don’t know who the author was, but you will have to prove to a court that you tried hard enough to find out who said it.  It’s also going to be very hard to collect on your suit if you don’t know who you’re suing.  You also need to know when and where the statement was published.  The date, time and place all matter for defamation claims.  If a statement was made in an on online forum, the first time it was published is the date and time that matter.  The place can also make a big difference because of those pesky differences in state laws.

Timing – this is very important.  If someone publishes a defamatory statement about you that is causing damages to you, you don’t want to wait too long before speaking to a lawyer.  In most states, a defamation lawsuit must be filed within one year of the publication date.  Although this is another one of those things that can change depending on your state, one year is commonly the rule in most states.  Even if you’re in a situation where you’re unsure about damages, you may want to speak to a lawyer sooner rather than later to make sure you know what you need to collect and know that you have a claim if damages do start to add up.

What are some reasons not to file a defamation claim?  The biggest reason is that lawsuits are public filings.  Filing a defamation case could actually serve to increase publicity around the statement that you didn’t want published in the first place.  If, for example, a former friend is spreading lies about you that otherwise qualify for a defamation claim you might want to think long and hard about filing a suit that will make those lies a public (and searchable) record forever.

Another reason not to file may be that the statement was made by a newspaper reporter.  This is not by any means a bar to a defamation claim, but it may make your lawsuit more difficult.  Many states have statures that protect the press from suits unless the reporter was grossly irresponsible in making the statement.  This is another area where being a public figure can make things tougher.  Again – and I know I’ve said this a lot now – talking to a lawyer is your best bet in deciding whether a defamation suit is the right move for your situation.

Finally, some defamation trivia.  You may have heard the words “libel” and “slander” but not be sure of the difference because people often use them interchangeably.   Libel is a defamatory written statement – something in a newspaper or a Tweet could be libel.  Slander is also defamatory, but it’s an oral statement.  Something false said to your friends or family, but not written down, would count.  It is always helpful to know the right word to use to describe what happened to you when you have that chat with your lawyer.

Having lies spread about you can be one of the worst feelings in the world, no matter what that childhood line says.  Sometimes it can cause a lot more damage than hurt feelings, though, and in those cases it’s best to look for a lawyer experienced in defamation claims who can help you decide the best course of action for you.

Maryam Hadden is a partner with Parlatore Law Group, who brings nearly a quarter of a century of experience in litigation to work for you. Ms. Hadden's practice area concentrations are investigations, white collar litigation, appellate work, and civil litigation. She has a wealth of courtroom experience with a solid record of success against anyone who underestimates her.