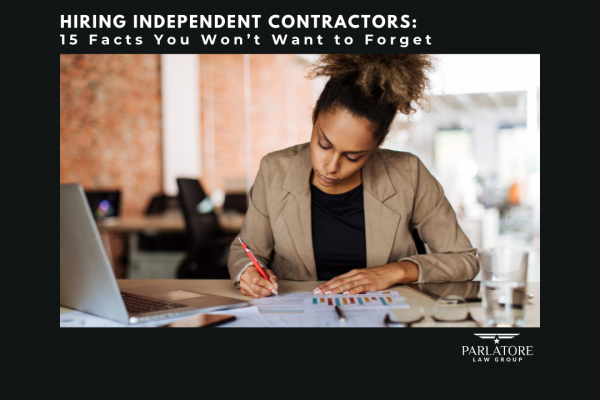 “Your business can save money by using independent contractors instead of employees,” they say.

Good idea! But all too often, “they” don’t tell you how to avoid becoming an “accidental employer.” (An internet search will probably not turn up results for “accidental employer.” It’s just my name for a business owner who attempts to hire an independent contractor but, through words or conduct, ends up with an employee).

Many people who are hired as independent contractors own a registered business entity, have an employer identification number (“EIN”), fill out a W-9 for the hiring party, receive a 1099 tax form from the hiring party, and file taxes as self-employed. While these things may be appropriate and helpful, if you are the hiring party, you might want to consider them the bare minimum for distinguishing them from your employees.

Here are some hallmarks of a true independent contractor:

Under most U.S. laws (State and Federal), if you hire an individual, the law essentially presumes the person is an employee. That is, until and unless you can establish that the person is an independent contractor. Yes, the burden of proving you are a “principal” (the party who contracts with an independent contractor), rather than an employer (the party who employs an employee), lies primarily with the principal.

In many cases, parties attempt to consent to classifying an individual worker as an independent contractor. In effect, this equates to the worker waiving the right to be classified as an employee and, therefore, most of the rights that would come along with being classified as an employee. But over time, too many businesses attempted to circumvent employment and labor laws by giving workers take-it-or-leave-it offers (either consent to being an independent contractor or find work elsewhere). So the law eventually eliminated discretion in the matter.

Nowadays, consent alone isn’t usually enough. You must actually establish (through an unambiguous agreement) and maintain (through conduct) a relationship that crosses the threshold sufficiently to overcome the presumption of an employment relationship. So in effect, an independent contractor agreement is almost like a 3-party contract. The third party (the government) allows you to hire an individual worker as an independent contractor instead of an employee, so long as you follow its rules; however, the government is the one and only arbiter as whether or not you’ve complied with its rules.

Also keep in mind that there oftentimes isn’t a single factor that distinguishes an independent contractor from an employee. Most laws set out a few circumstances that make it absolutely clear when one individual worker must be classified as an independent contractor and when another must be classified as an employee. But for the individuals who don’t fall squarely into one category or the other, the analysis is based on the totality of the circumstances.

To make things even more complicated, the default rule is sometimes applied even when you “hire” a company rather than an individual. For instance, if you contract with another business that then sends you an individual worker, your relationship with that individual worker may subject you to liability as a “joint employer” under certain labor and employment laws. So the main thing to remember is that, “hiring” a company or “hiring” an individual through a company does not always prevent “accidental employer” status and liability.

ESTABLISHING AND MAINTAINING A CONTRACTOR RELATIONSHIP

So what can you do to avoid becoming an “accidental employer,” especially with so many variables?

The easiest thing is to just think of what makes an individual “self-employed.” The Federal Fair Labor Standards Act (“FLSA”), the IRS, and related State laws use different tests to determine when an individual is an independent contractor (vs an employee). While the tests have different names and are articulated slightly differently, they all address the same basic principles – control and independence.

The IRS applies a 20-factor test. While this may sound more complicated than the 6-factor economic reality test, both tests ask similar questions, result in similar answers, and often lead to similar conclusions. For the 20-factor IRS test, each factor speaks to at least one of three prongs: (1) relational, (2) behavioral, and (3) financial.

Keeping in mind the principles of control and independence, it helps to think of the 20-factor IRS test this way:

An independent contractor is an outsider to the principal’s business.

An independent contractor offers services to a principal, not to a principal’s clients or customers (with a few exceptions, like some salespeople).

If an independent contractor provides services to a principal’s clients or customers, they are different from the services the principal offers during the ordinary course of business.

An independent contractor has temporary (although sometimes repeat) relationships with their clients.

An independent contractor works independently without interference from a principal.

An independent contractor decides manner, time, and sometimes place/location of their performance.

An independent contractor may delegate their work (some or all) to their subcontractors or their own employees.

An independent contractor issues invoices and/or receipts and is often paid a deposit before beginning work.

An independent contractor is paid for the work they complete, not the amount of time they work.

What if you get it wrong and the individual worker you believed was an “independent contractor” was really an employee? Unfortunately, you could end up being liable for more money than you attempted to save by classifying the worker as an independent contractor. For starters, you will be liable for back taxes for that employee. But it doesn’t end there.

Worker misclassification is a prime example of how firmly the government sticks to the old adage “ignorance is no excuse.” Since the burden is on a hiring party to know (or figure out) what the law requires of them, in most cases, fault under labor and employment laws are strict liability. This means you can be held liable for violating a law without even knowing that you violated the law. Worse, if there’s evidence that you knew (or should have known) and did it/continued doing it anyway, the penalties could be stricter.

Last, don’t be fooled by things like your “industry standards,” your franchisor’s contract of policy templates, or how it was back when you were supposedly an independent contractor. Lots of businesses are running the risk of being “accidental employers” and just haven’t been caught yet. (But don’t forget strict liability.)  In addition to being based on the totality of the circumstances, what matters most for your worker relationships is your specific set of circumstances.

Now that you’ve refreshed your memory on the distinction between an independent contractor and an employee, these 15 simple facts can help you remember how to not to become an “accidental employer.”

When you’re faced with trying to distinguish between an independent contractor and an employee, it could help to think back to other individuals who you may have hired in the past, like auto mechanics, consultants, massage therapists, or plumbers. (If you weren’t in the same business and you weren’t managing, supervising, or directing their performance, it’s highly likely you had an independent contractor relationship them.) Then remind yourself of how the relationship played out. For example:

It’s best to speak with a knowledgeable attorney BEFORE you even begin negotiating a deal with a prospective individual worker. If you’ve already made an offer or hired, it may not be too late to ask about changing directions. Also, if a contractor presents their own contract, it doesn’t hurt to have an attorney review it with your interests in mind. Either way, just a quick conversation could help you avoid becoming an “accidental employer.”

Feel free to contact N’kia to discuss your business’ legal needs. She can be reached at: nkia@parlatorelawgroup.com or 919-335-6399.

N’kia is Partner with Parlatore Law Group and dedicates her practice primarily to business law concerns, including business formation and development, employment, board licensure, unfair competition, contract formation and disputes, and intellectual property. She also handles a variety of general civil litigation matters, with her special interest being defamation (libel and slander). Her well-rounded legal background makes her well-equipped to meet her clients’ diverse needs. To learn more about N’kia, click here.

DISCLAIMER: THIS ARTICLE CONTAINS OPINIONS OF THE AUTHOR. UNDER NO CIRCUMSTANCES SHALL IT OR ANY PART OF IT BE CONSTRUED AS (1) FACT, GOVERNING LAW, OR THE OPINION OF ANYONE OTHER THAN THE AUTHOR; (2) APPLICABLE TO ANY SPECIFIC SET OF FACTS OR CIRCUMSTANCES, YOURS OR ANYONE ELSE’S (3) LEGAL ADVICE OR COUNSEL, TO YOU OR TO ANYONE ELSE; OR (4) INTENDING TO CREATE OR HAVING CREATED AN ATTORNEY-CLIENT RELATIONSHIP, WITH YOU OR WITH ANYONE ELSE.