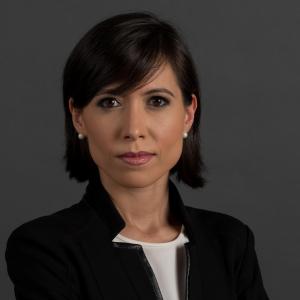 Maria Jose Rivera is Counsel at Parlatore Law Group, and an entertainment lawyer, focused in the areas of copyright, trademark, litigation, international intellectual property, and business-related matters. Drawing from storytelling, film, music and the arts, her practice is dedicated to empowering the artists, entrepreneurs, startups, innovators, authors, and recalibrating small, independent business, arts, and culture.

As a young girl in Venezuela, Ms. Rivera was attracted to intellectual property creations like television shows, movies, and music. Unlike most viewers, however, she would not empathize with the protagonist, but instead identified with the lawyer characters. Later, her family moved to Puerto Rico, and then settled in South Florida when she was a teenager. It was here that she became aware of the abundance of pirated CDs and DVDs; an awareness that bothered her and marked the first time she imagined herself protecting the rights of artists.

This passion for safeguarding the creative process, has followed Ms. Rivera throughout her career. Prior to joining Parlatore Law Group, she helped secure a victory for a small-business client whose use of the MonsterFiskKeepers name was opposed by the Monster Beverage Company. She helped in another trademark case against Nautica on behalf of another small-business, Nautigirl Brands, LLC. Lastly, she helped an independent film maker on a copyright case in the documentary “William and the Windmilll.”

Her time spent completing a Master of Laws in Entertainment, Arts and Sports law at the University of Miami, further fueled her passion, allowing her to work with Hispanic media industry companies like NBCUniversal Telemundo and Univision. These experiences provided her agility working throughout the Americas and fueled an influx of international ideas with motion pictures, television, music production and distribution.

Ms. Rivera is an active member of the Florida Bar’s Entertainment, Arts and Sports Law Section and the American Bar Association’s Forum on Entertainment and Sports Industries.

Outside of her legal practice, she enjoys spending time reading, writing, and discovering film. She also enjoys running, cooking, traveling, and learning tennis.

She is fluent in Spanish.

She is admitted to practice in Florida, in addition to the United States Patent and Trademark Office.