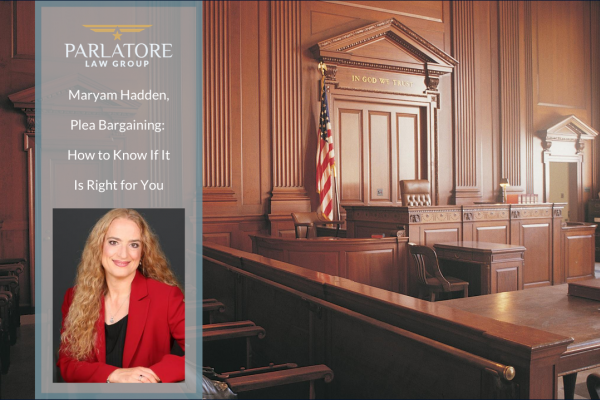 The handcuffs are off. Now what do you do?

For many people, the first question following arrest (or if you believe arrest is imminent) is where to find a good lawyer.  How do you know who to hire?  Do you want to pay an attorney?  Do you want to use the free lawyer offered to you by the court system?  The answers to these questions vary by case.  Maybe your case is very simple and can be ended at your arraignment – the first time you appear in front of a judge.  Maybe you’re innocent of the charges and want the most tenacious lawyer possible to go to battle for you. Or maybe, your goal is to get the very best deal that you can, and that’s what we’re going to talk about today – who can help you get that deal and how you can find them.

There are many reasons why you might want to look for a plea bargain early on rather than fighting a case to the bitter end.  You may be facing overwhelming evidence of guilt – between cell phone videos, security cameras, and scientific evidence such as fingerprints or DNA, sometimes there is a mountain of proof against you. Or perhaps the evidence is not so airtight, but the charges against you carry heavy prison terms.  Going to trial is always a risk, and sometimes that risk seems unbearable when losing means facing a decade or more behind bars.  There can be serious economic consequences to taking a case to trial – not just the costs of legal fees, but possible fines or repayments to a victim.  Maybe the government is threatening to seize your property and hold it in a process called forfeiture.  Some convictions can have serious collateral consequences as well.  You may be interested in an early plea because conviction could cost you a liquor license for your business or have serious immigration consequences.  With so many possibilities to consider, the whole process can feel overwhelming.

First, it helps to have a basic understanding of the steps in a criminal case.  Following an arrest, every defendant has a right to an arraignment. This is a proceeding that goes very quickly and can be confusing.  You will appear in front of a judge, with a lawyer, and the prosecutor tells you the charges.  Bail might be set, meaning that you have to give money to the court as a sort of promise that you’ll come back on each court date, or you might be released “on your own recognizance” (for free).  In some cases, you may be held without bail, meaning you’re required to stay in custody until the next court date.  Arraignments begin the criminal case, and so do discussions about plea bargains.  A plea bargain can take place any time between arraignment and the later steps in a case – during or before motions, hearings, or during a trial.

So, what is a plea bargain?  A plea bargain is a deal made between the prosecutor and you, the defendant.  Depending on whether your case is being prosecuted on the federal or state level, the judge may approve the deal or may be an active participant.  Plea deals can be reached in many ways, and almost all criminal cases resolve this way at some point – only a small fraction, around 10%, go to trial.  A plea deal might involve the prosecutor offering a low sentence recommendation, or offering the defendant a plea to a less serious charge.  Sometimes cases can be resolved by reducing a felony charge to a lower misdemeanor charge, or even with a non-criminal charge like a violation.  Outright dismissal is also a possibility in some cases.  Some plea bargains involve some work from the defendant – testifying against someone else, for example, or giving information about other crimes to the prosecutor’s office.  But most plea bargains don’t involve extra work on the defendant’s part, other than answering questions during the guilty plea itself (this step is called an allocution in most jurisdictions).

Do you have to give up any rights in a plea bargain?  Yes.  Part of a plea bargain is giving up your right to confront the witnesses against you, your right against self-incrimination, and your right to a trial by jury.  In many cases, you will also be asked to give up your right to appeal your conviction.  Basically, a plea bargain is you saying to the prosecutor, “I’m not going to make you prove your case against me as long as you let me off the hook easier than a judge would after trial.”  It’s a risk analysis for both sides.  Because juries are unpredictable, they could set you free or they could convict you of the maximum charge.  Depending on the case, that could involve spending a lot of time in jail or paying hefty fines – or both.  Plea bargains give both sides a definite outcome and a sense of finality.  It’s all done once the plea has been taken.

Can anyone force you to take a plea bargain?  Definitely not. A plea bargain is the defendant’s choice.  While case strategy may be up to your lawyer, which is one of the reasons to choose a lawyer you can trust, ultimately the decision to take a plea bargain is yours alone.  A plea bargain must be knowing, voluntary and intelligent – meaning that you know what you’re doing, you understand why you’re doing it and what the consequences are, and that your mind is not being affected by medication or anything else.  In all but the most minor pleas, judges will ask questions of you to make sure that your plea is your choice.  You should also expect to be asked if you’re pleading guilty because you are, in fact, guilty of that particular charge – so you need to make sure that the plea bargain is one that you are comfortable with.  Hopefully, no one wants to knowingly convict an innocent person. Certainly no judge wants a record that they took a guilty plea from someone protesting their innocence.

How is a plea bargain reached?  This is where your choice of lawyer can become important. If you have a complex or high-stakes case, the right lawyer can make all the difference.  This is because plea negotiations happen almost entirely between your lawyer and the prosecutor.  You have the final say, you set the stage and tell your lawyer what you are looking for, but it’s up to your lawyer to go and try to make that happen.  I say “try” because, just as accepting a plea bargain is your choice, giving it is the prosecutor’s choice.  Even if the judge is on your side, they cannot force the prosecutor to offer you the deal that you want.

Some lawyers specialize in plea deals and rarely, if ever, go to trial.  Some lawyers love the courtroom, love fighting, and just want to get your case to trial, forget the deal.  Sometimes you will find yourself in a situation where one of those “one trick pony” people is the right fit for you.  You know what you want and they’ll go get it.  But far more often, you want to find someone who is comfortable in both worlds – someone who can play nicely with others well enough to give you a great chance at getting the best deal possible, but who can take your case to trial with skill and confidence if the plea bargain negotiations fall through.

Finding that lawyer with both skill sets can be tricky. You want someone with experience.  Many defense attorneys started their careers as prosecutors.  This can give both connections and some great insight into the other side of the process.  These are things that could help you.  Ask your potential lawyer about their trial experience.  Have they ever tried a felony case before?  How many?  Be wary of anyone who tells you that they’ve won every trial they’ve ever done.  Ask more questions.  Winning every trial becomes significantly less impressive if it was only two misdemeanor cases in the last ten years, for example.  Have they handled cases similar to yours?  Some attorneys specialize in certain areas of criminal law. Some attorneys have a more general practice and have tried many different kinds of cases.

What about the other side of the coin, skills that make a good plea bargainer?  First, experience counts here, too.  Knowing the laws governing your particular case and the possible outcomes is very important.  But you also can get some sense of this skill from how the lawyer talks to you.  Do they rush you and seem impatient, or are they willing to take time and answer questions?  Are they respectful on the phone?  When they explain something, is it clear?  Do they talk down to you?  A lawyer who is a good communicator and pleasant to talk to can be a big asset for plea negotiations. Remember that someone who annoys you when you’re communicating with them will probably have the same effect on that prosecutor who needs convincing.

In the end, there is no “one size fits all” answer to which lawyer is right for you. Every case, and every client, is unique.  Look for a firm like Parlatore Law Group that recognizes that individuality and that will treat your case with the time and attention it deserves.  Look for the best of all possible worlds for your situation.  The right treatment for your case is out there … will you find it?

Maryam Hadden is a partner with Parlatore Law Group, who brings nearly a quarter of a century of experience in litigation to work for you. Ms. Hadden's practice area concentrations are investigations, white collar litigation, appellate work, and civil litigation. She has a wealth of courtroom experience with a solid record of success against anyone who underestimates her.

In addition to this background, she has worked tirelessly to negotiate dispositions when a trial is not in the best interest of either party. She has worked extensively in investigations and is particularly well-versed in the field of DNA evidence and analysis, including its usage in criminal cases. She has argued many cases before the Appellate Division, Second Department, in the state of New York. She is known as a zealous advocate, a thorough researcher, and has established solid relationships with both the defense and prosecution bar.